One of my favorite layovers as a flight attendant is Raleigh, North Carolina. I’ve been there four times now and I love it. I can’t believe it took over two years to discover it! I have been a Flight Attendant for almost three years. I fly all over the United States as well as a few international destinations, but mostly in the U.S. 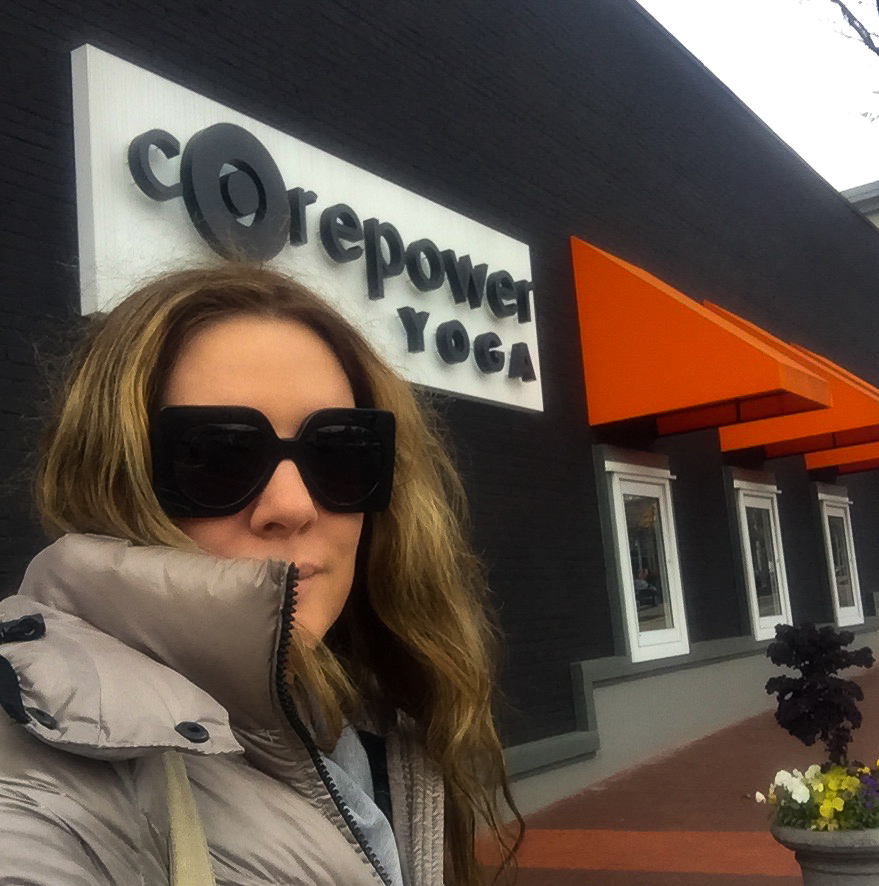 I took a great class from Kathleen at CorePower Yoga in Raleigh.

For the first two years of flying, I was a reserve flight attendant. This meant I was on call for 14 hours a day, up to five days a week. I was assigned trips with as little as  two hours notice and had to be at the airport and ready to roll. I never got assigned a trip to Raleigh while on reserve. I didn’t even know where it was on a map. Geography is not my strong suit. Another flight attendant told me I could take a quick train ride from Raleigh to Washington D.C. and I believed her.  When I told my fiance my plan for the trip (of visiting the capitol) he nearly rolled on the ground laughing.

“I don’t think you have time to take a train to D.C.,” he said. My source had confused RDU with IAD (Dulles).

I had no expectations when I finally had an RDU (Raleigh Durham airport code) put on my line (work schedule for the month). It was a longish flight from Seattle (over five hours) and the people were nice. As was my crew. We landed and found our shuttle van. As we drove to our crew hotel, I took in the scenery. The entire drive to the hotel was covered with beautiful trees on either side. I instantly liked the area.

We landed and arrived at our hotel in the heart of downtown Raleigh. The hotel is beautiful and Raleigh is walkable. There are a lot of great places to eat. I discovered a place called Happy + Hale across the street. I’ve gone there on every layover. Happy + Hale offers juices, smoothies and made-to-order bowls. Everything is compostable and everyone that works there has been sweet and helpful. The juices are bottled and great to grab and go. 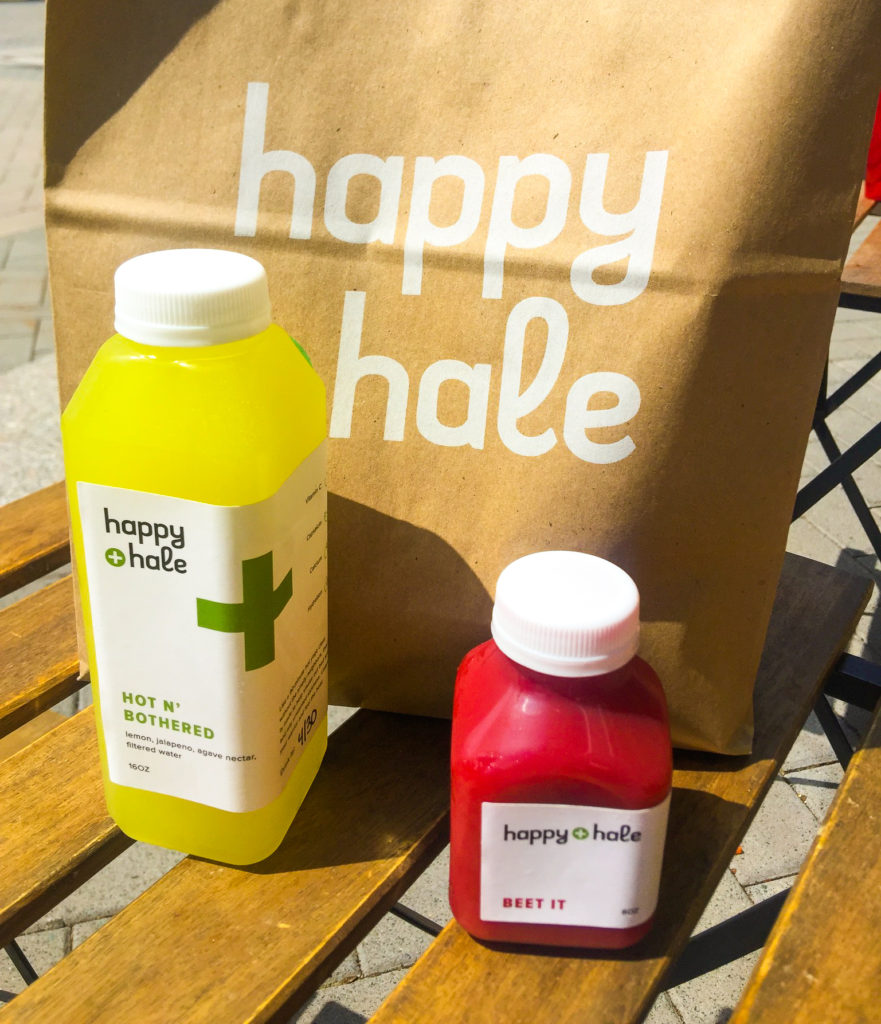 A lot of times crews I’m with on layovers want to go out for BBQ when we are in the South. I figured I would venture out alone because I wasn’t going for ribs. I found a vegetarian restaurant with vegan options called The Fiction Kitchen. I was shocked when another flight attendant said she would go with me. She wasn’t even vegetarian.

We walked about 15 minutes and located The Fiction Kitchen on a busy strip of road a few blocks from our hotel. It had a rich green facade and was hopping inside. The restaurant has a fun, hip vibe to it. I noticed a few groups of fairly large parties, including one bachelorette party. The Fiction Kitchen is located on a block in the historic train depot and warehouse district and is 100% vegetarian. The location was strategically chosen, in part to be near two local Farmer’s Markets in order to stay on top of the freshest local produce and to be able to offer seasonal menu changes and specials. 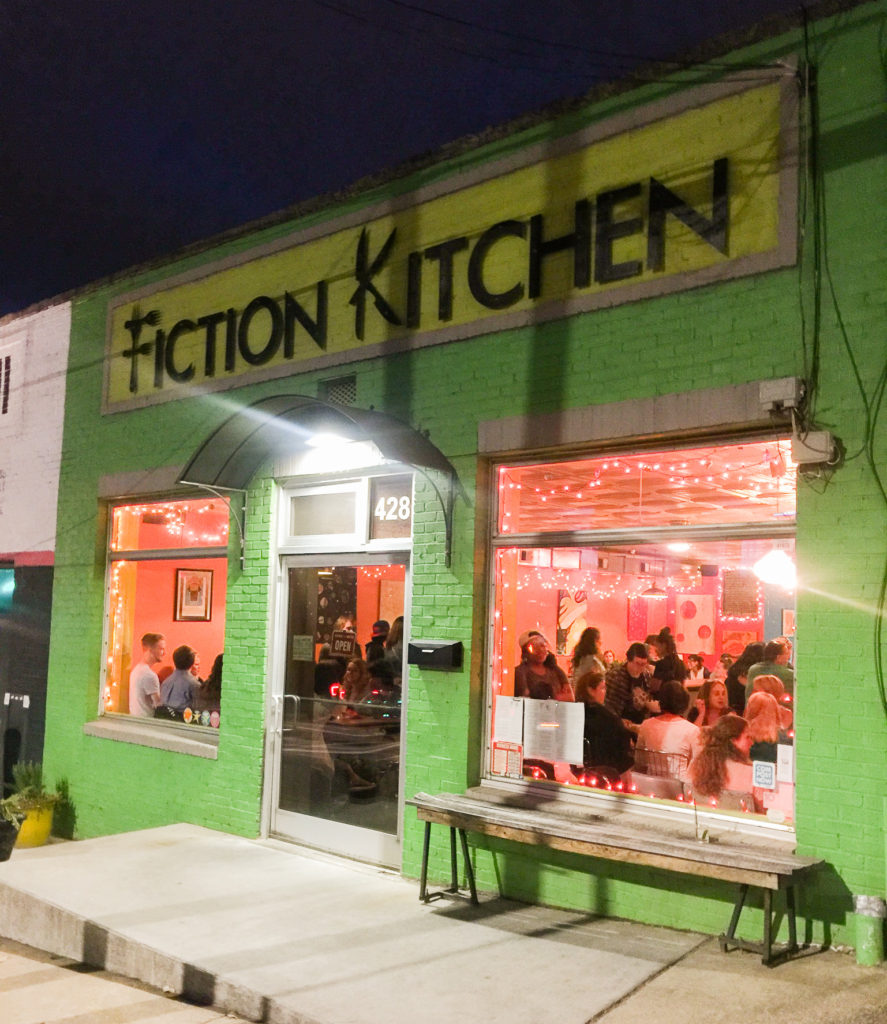 We arrived at four o’clock on a Thursday and the wait for a table was almost an hour and there was even a waitlist for bar seating. We opted for first available and two bar seats opened after 20 minutes.

We ordered the Cornmeal-fried Oyster Mushrooms ($9.00) for an appetizer. They are served with “fresh herbs, lemon wedge and fresh dill aioli or tossed in spicy sweet chili sauce with sesame seeds and scallions (vegan). I had them prepared with the aioli. The fried cornmeal gave the mushrooms an interesting texture and they tasted good but were a little heavy with my main course which was “chicken” and waffles ($12.00).

I ordered the chicken and waffles based on a recommendation from a vegan flight attendant friend via yelp. I often see her reviewing vegetarian and vegan restaurants near our layover hotels. The dish was absolutely amazing. I wouldn’t say it tasted like chicken it just tasted good. It looked like chicken. It had a fried exterior and was tough and hearty enough inside to be a substantial protein. The waffles were yummy. My friend loved it as well. The Fiction Kitchen describes the dish as “marinated, herb seasoned, dredged and friend mock chicken served on a Belgian style waffle, garnished with dressed arugula and agave (vegan). 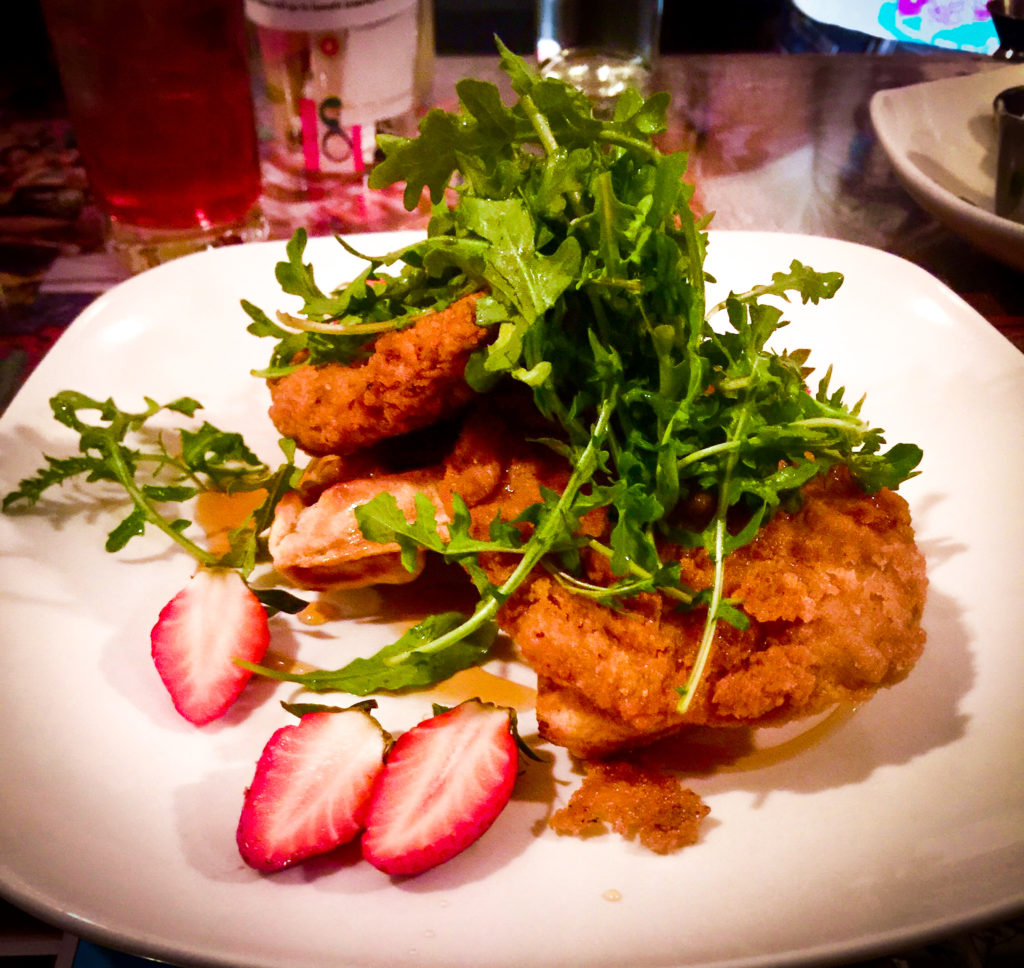 “Chicken” and Waffles at The Fiction Kitchen

I was too full for dessert, but I’ll be back! On the dessert note-my favorite dessert place in Raleigh is Bittersweet. It is a cocktail/coffee/dessert bar with over 40 types of gin that is opened super late, plays great music, has a swanky vibe and killer sweets. Bittersweet is opened until 2am on the weekends (21 and up after 8pm) and is the earliest open bar (7am) and latest opened coffee shop in Raleigh. I like a place that serves morning birds and night owls alike.

If you are in Raleigh, you can’t go wrong with any of these three joints.