A Day at The Long Beach Vegan Festival

The third annual Long Beach Vegan Festival was held a few weeks ago on a hot and humid Saturday in Southern California. I had planned my trip South to visit family around the foodie fest, heat be damned! The Long Beach Vegan Festival is held on the Cal State University Long Beach campus near the Walter Pyramid. There were bands, vegan merch and food and drink booths. Read on to learn about my favorite up-and-coming vegan caterer, my first experience trying virtual reality (VR) and a sweet vegan dessert company. 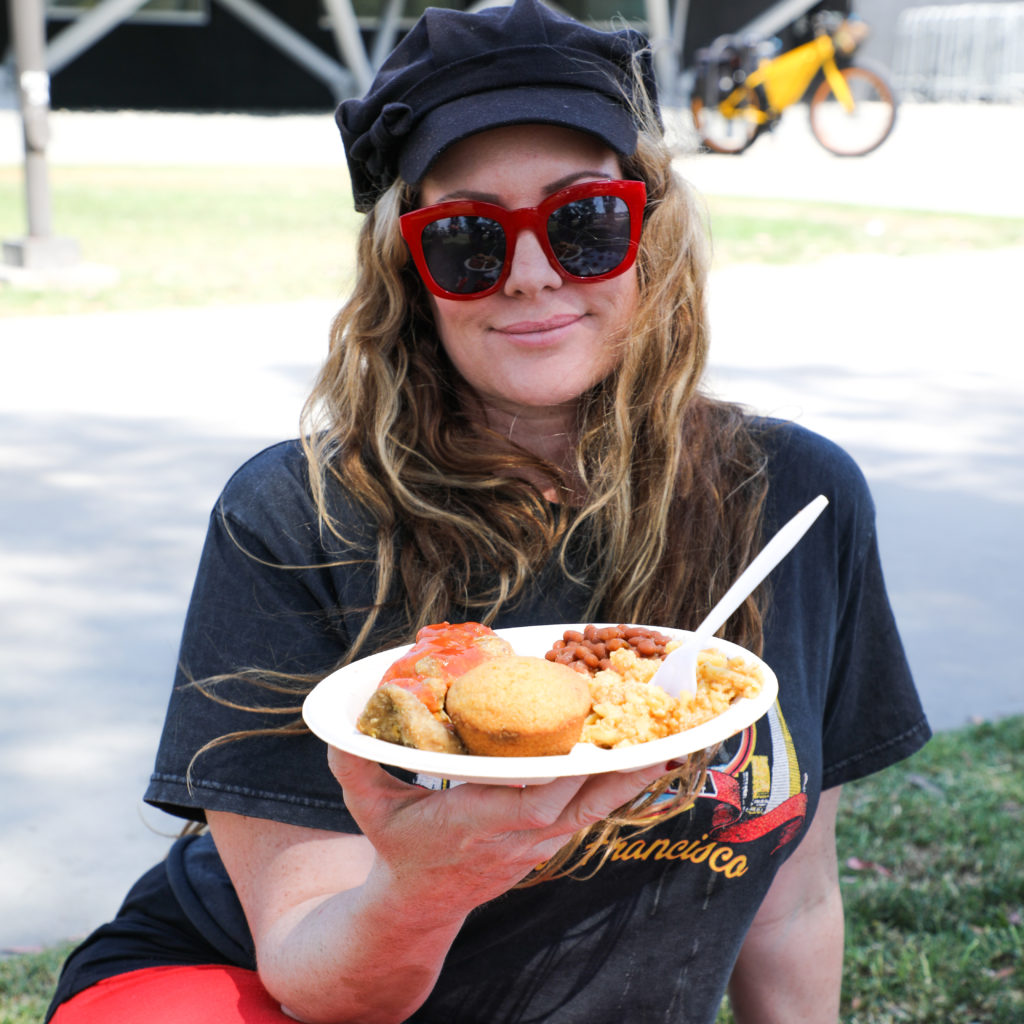 I went to the festival with my fiancé, Boë. When it came time to get lunch, there were probably 30-40 food trucks to choose from! The ones we were drawn to happened to have huge lines. We spotted a soul food truck and joined the herd. I walked up through a winding line of people while Boë stayed in line. I noticed they were quickly selling out of items, including “chicken” tenders which is what I wanted. We had already waited in line 20 minutes but I could see they were going to keep selling out of stuff. We reluctantly decided our wait had been in vain and sought out another truck. I spotted Compton Vegan which looked bomb and we got in line again. 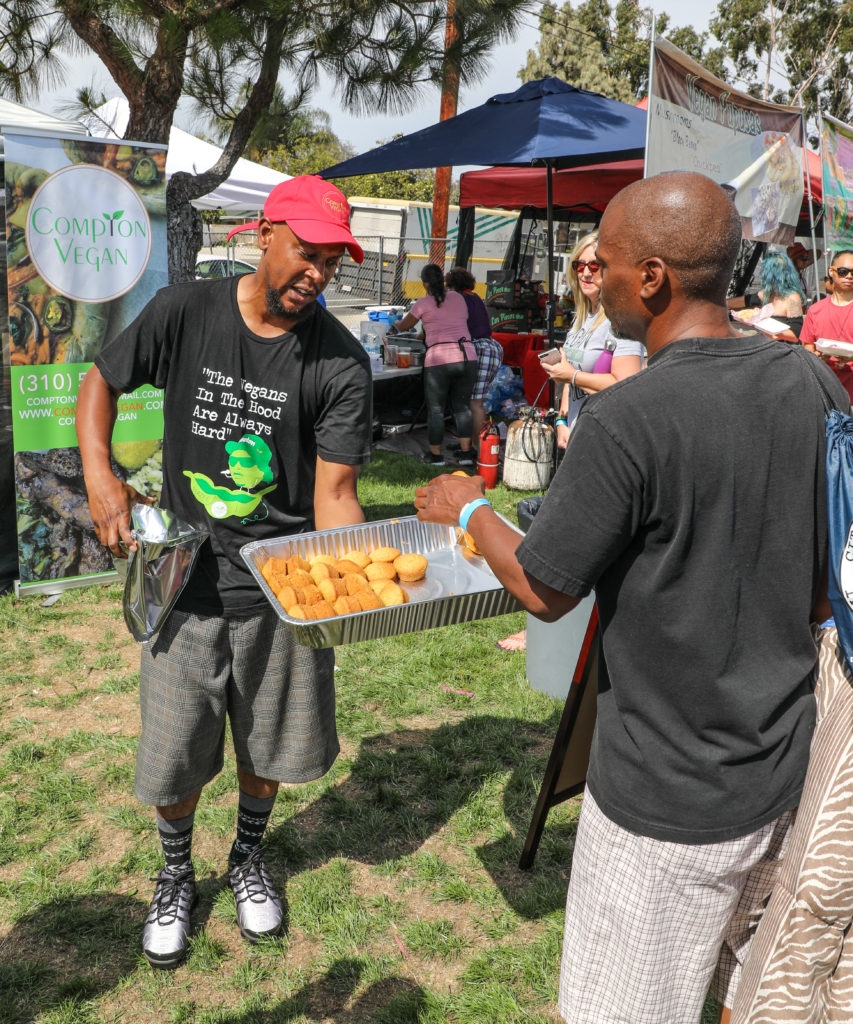 Compton Vegan Owner/Chef Lemel Durrah handed out free cornbread to festival goers after he sold out of main dishes.

I went to fetch drinks and Boë waited in the Compton Vegan line. After 30-40 minutes we were six people from the front. Lemel Durrah, the owner of Compton Vegan, stepped out from behind the tent and kindly informed everyone that he might run out of food before everybody ordered. He was selling out and Boë was worried he wouldn’t get his jackfruit ribz. Literally, when we were one person away from the front, the woman in front of us ordered the last ribz.

We took our chicken and juice and sought out shade. I ordered spicy buffalo wings and he got the BBQ flavor. The thing I love about vegan chicken wingz is that there are no bones (obviously). It’s just yummy flavor. Our wingz had vegan ranch dipping sauce, mac n’ cheeze, cornbread and beans. Compton Vegan operates as a catering company but has plans to expand into a food truck. At the moment, there is daily delivery to nearby areas. 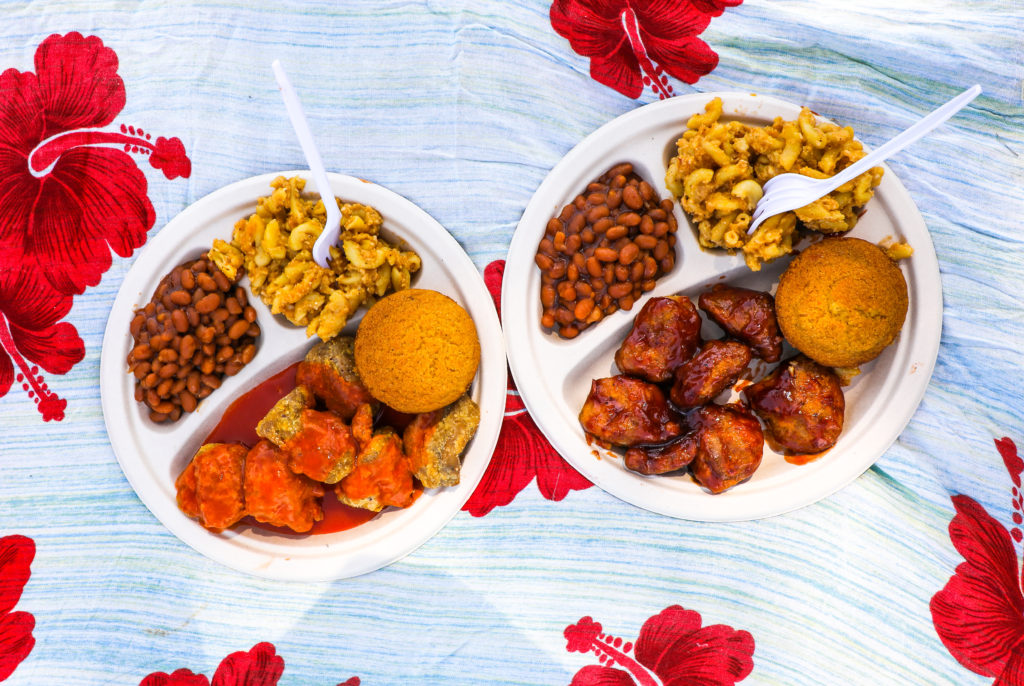 After lunch, we wandered around and checked out the merch tents. I bought some spray that is supposed to cleanse spaces of bad vibes and that was blessed under the full moon. I may have just overpaid for essential oils but whatever. It smells nice. Then I spotted a tent with a cow on one side and a quote from Moby on the other. It was an animal activist/educational group called animalEQUALITY that offered a virtual reality (VR) experience at the tent. It was my first experience with VR and although it was sad, it was a powerful experience. 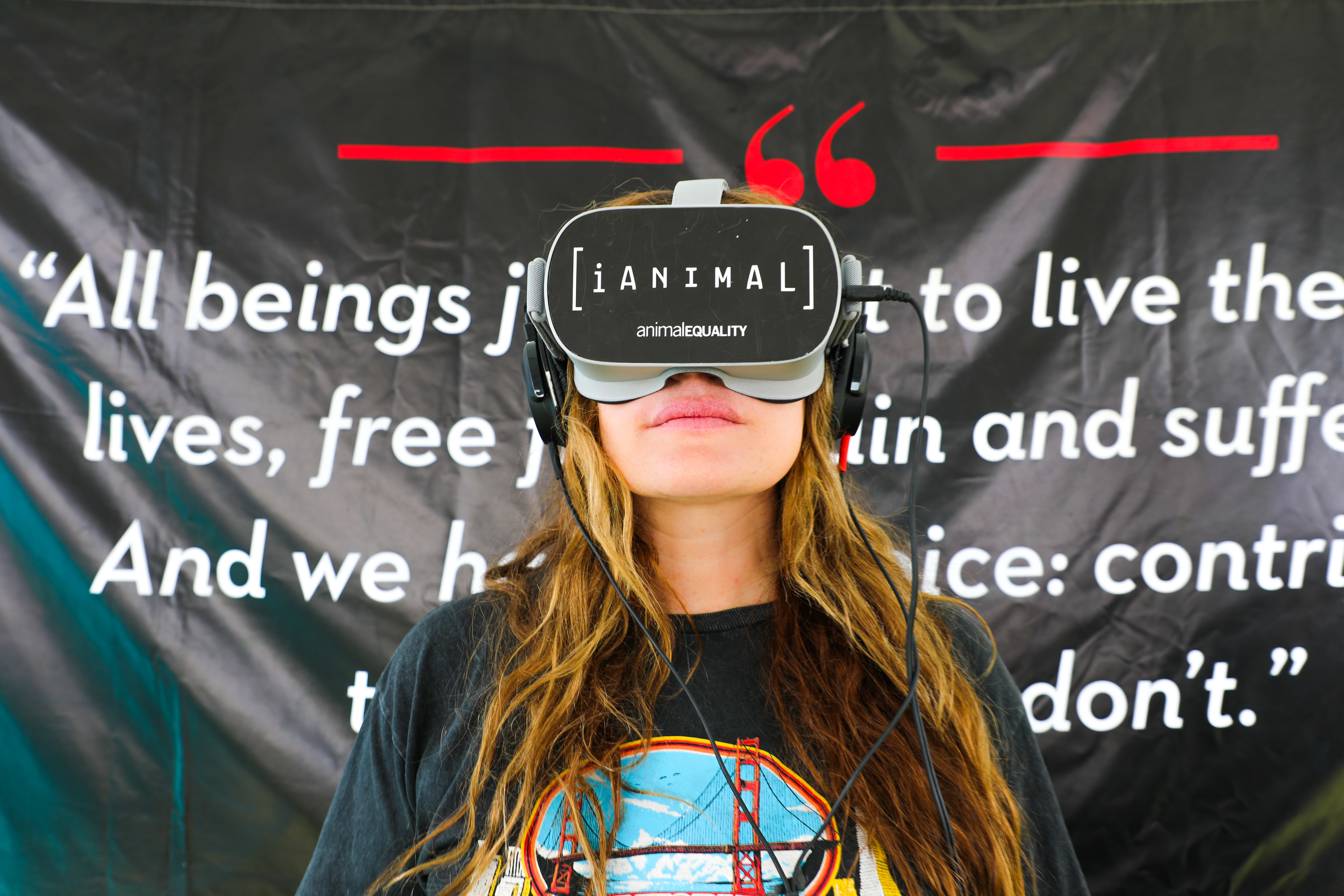 VR at the animalEQUALITY tent.

animalEQUALITY educates people on animal welfare and is one of the “leading farmed animal protection organizations in the world.” Check out their website to see videos and learn more about their cause. 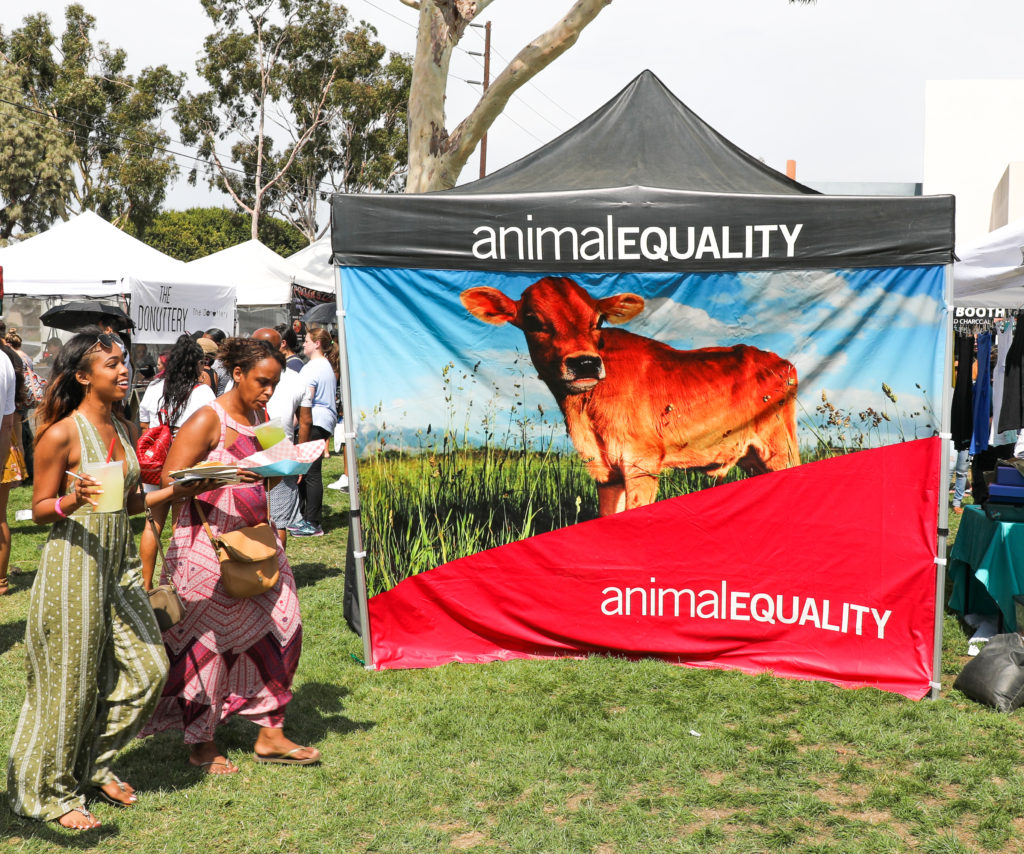 After a good vibes filled day with music, laughter, good vegan food and shopping, there was only one thing missing–ice cream!! What better way to end a heat wave day than with yummy ice cream? Cocabella Creamery had a limited edition Macaron Sundae with a violet macaron from Sweet Maresas in New York City. It was only available at the Vegan Fest so we had to order it! It did not disappoint. 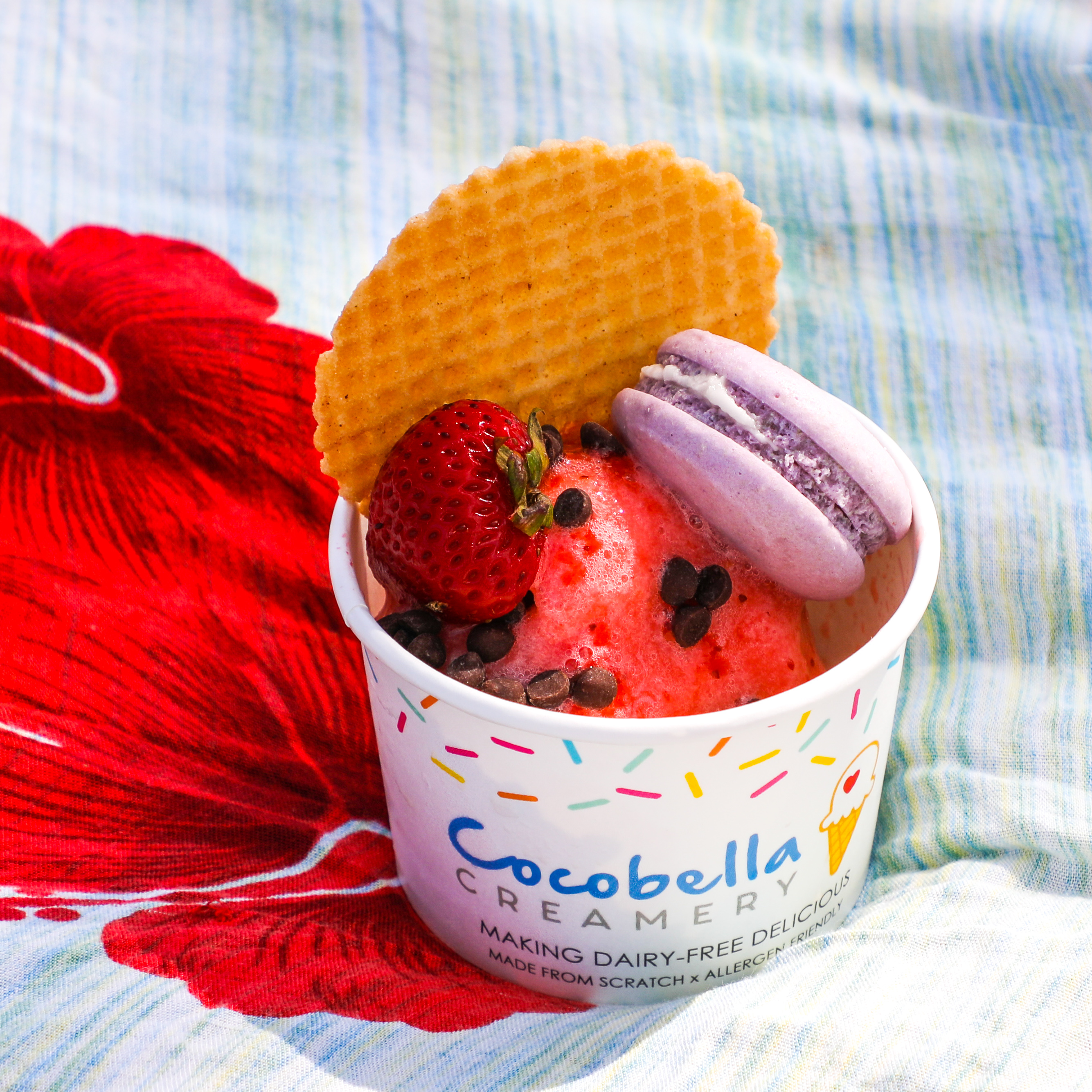 The Long Beach Vegan Festival was a grassroots, hyper local, fun festival. Part of the revenue from the ticket sales is donated to Long Beach Vegan Festival founder Kawani Brown’s non-profit organization Plant Based For All, which provides meatless food to people who are homeless or suffering from food scarcity. I encourage any Southern California locals or traveling plant-based peeps to check it out next year. Plan a little beach vacay around it-you won’t regret it!