14 Jul 2018 Kris
This week I was able to take advantage of having a chunk of days off work to visit family and friends in Orange County, California. Before I got there, I was already filling my calendar with a list of vegan restaurants and events to hit. I kicked off the weekend at the Long Beach Vegan Festival which was a lot of fun. I really liked a soul food booth there called Compton Vegan. I also made it a point to go back to Vegan Nirvana, World Peace Cuisine, in Huntington Beach. I had been there before and was craving their vegan shrimp (or “shrimp-free crescents”). 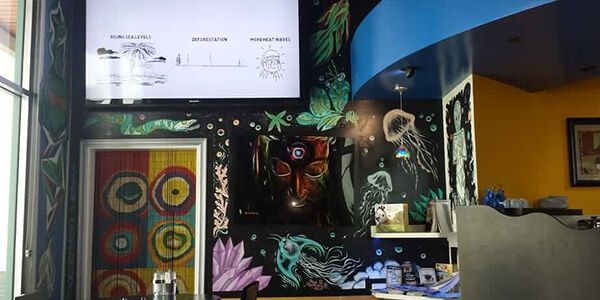 When I visit my hometown in Orange County, California, I always hit a couple of vegan restaurants. Last trip I went to Gratitude in Newport Beach. I have been trying new places and dishes on each trip. Even though Vegan Nirvana wasn’t a new restaurant, I had an ulterior motive for going back. I brought my carnivore-loving Brazilian brother-in-law who is super allergic to shrimp (stomach cramps, etc.) but loves shrimp so much he occasionally endures the pain to eat it. I told him I had found a way for him to have his cake and eat it too and wanted to introduce him to vegan shrimp.

He met me at Vegan Nirvana with my sister and her kids, none of whom had ever been to a vegan restaurant or had a vegan meal before. My niece and nephew loved the animal and nature videos playing on the big screen TV up overhead (silent, so it’s not annoying) and the faux fireplace that hangs at head level against one wall. There is an array of limeade juices including: Jackfruit limeade, strawberry mint limeade (my choice), blueberry limeade and organic iced tea limeade.

.We ordered Humble Warrior cajun fries as an app and I ordered the Ocean of Love entree (pic below), my fave. Their website describes it as “a mound full of crunchy, golden shrimp-free crescents tossed with fresh jalapeño, garlic,green onion, red bell peppers, and basil. Served with lime.” My niece also ordered it and loved it. My sister and nephew ordered the vegan chicken tenders. 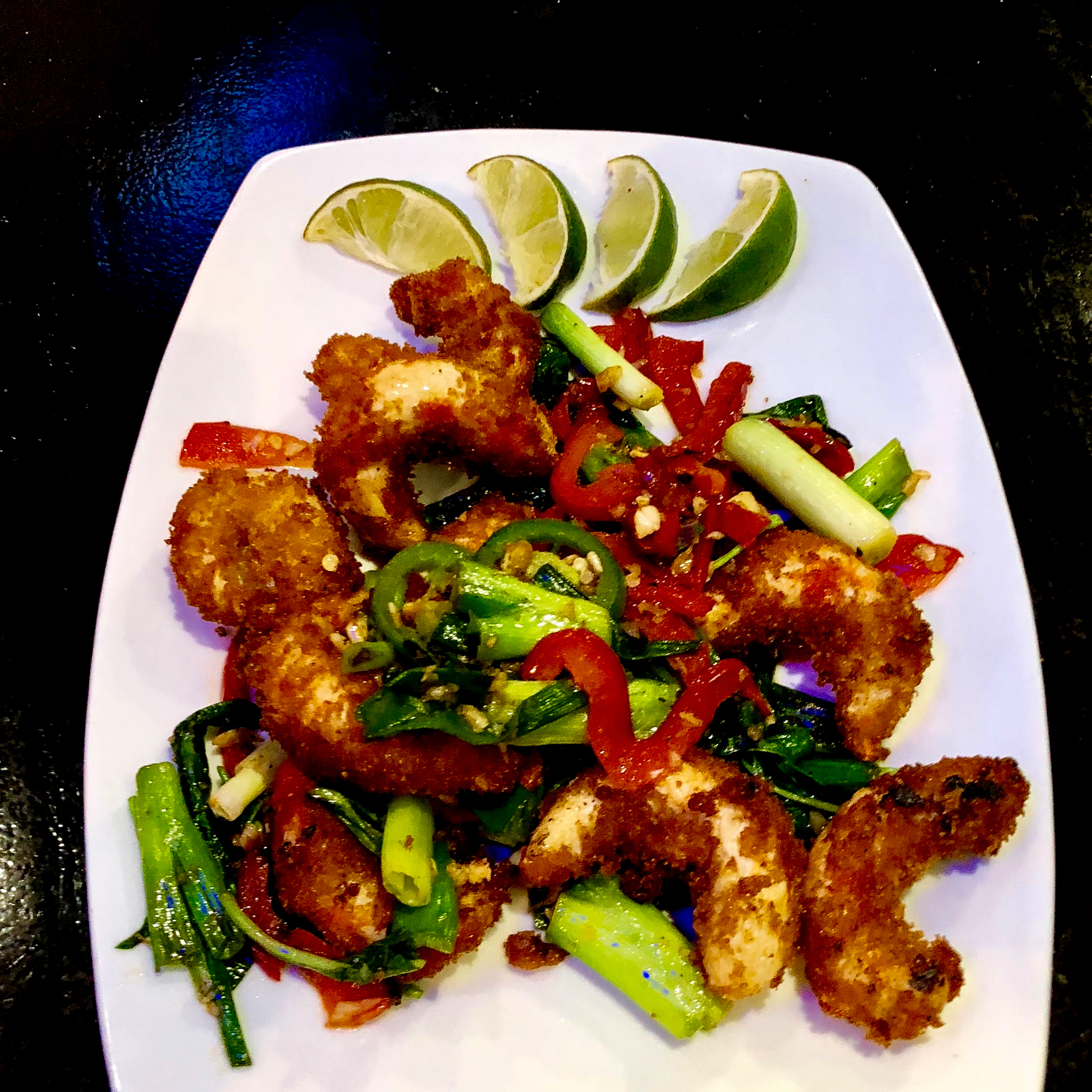 My brother-in-law chose one of the two vegan shrimp dishes on the menu–Deep Sea Meditation. The website describes it as “crispy shrimp-free crescents tossed with pineapple, red onion, green onion, jalapeno, red bell peppers, and cilantro in our delicious sweet & sour sauce with your choice of steamed white or multi-grain rice with sesame seeds.”  He added multi-grain rice and loved the shrimp-free crescents. He still can’t get over how true to life the consistency is. Best of all? No stomach cramps.

My fiancé ordered The Ultimate Liberation, a vegan fish dish (pic below). The menu describes it as “Crispy fish-free fillet tacos topped with fresh cabbage, pico de gallo, cilantro, and Chipotle sauce. Served on corn tortillas with lime.” He describes it as delicious. 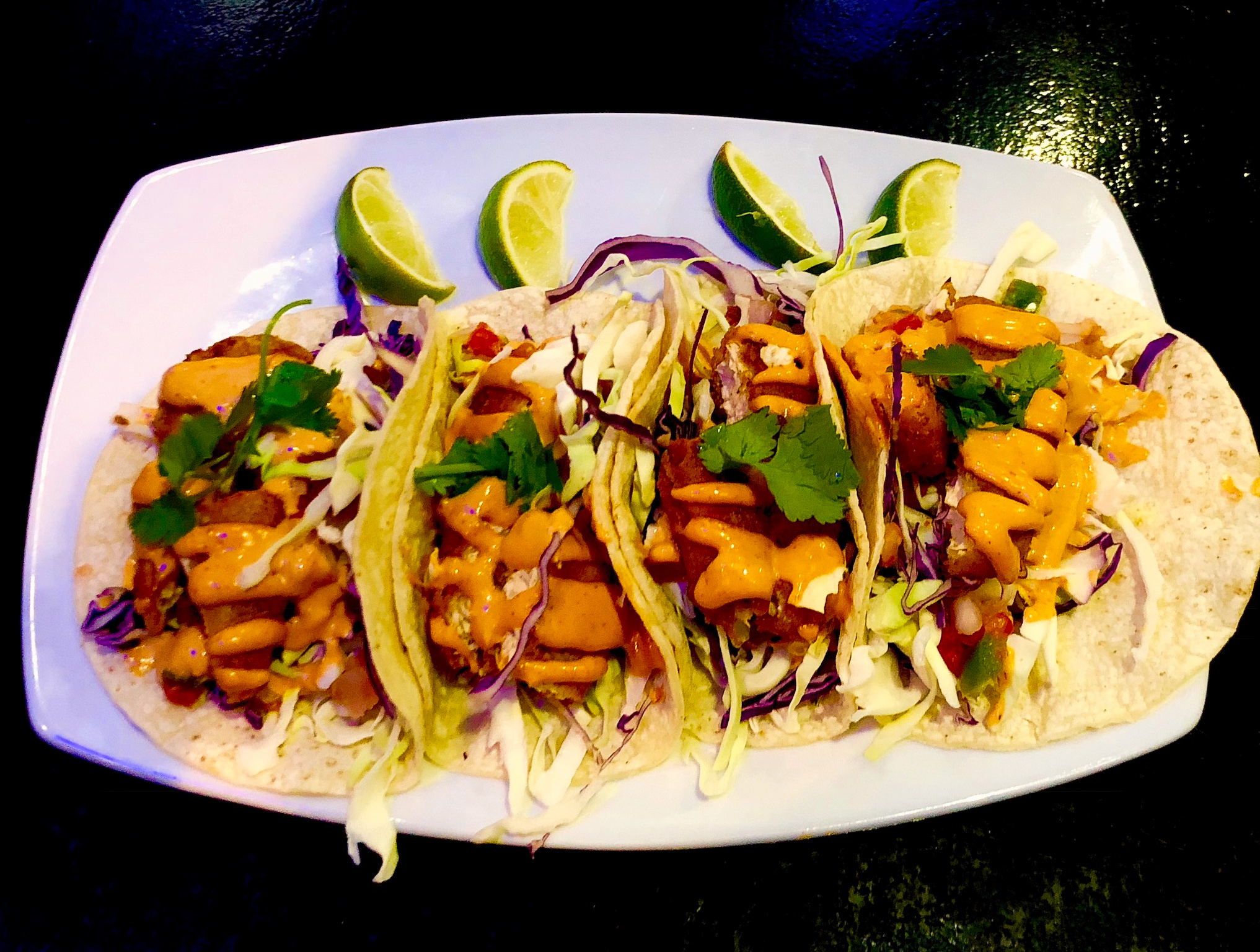 There are always a lot of options at all hours of the day in Orange County but if you are looking for a fun, laid back vegan restaurant that you can easily bring non-vegan friends to I highly recommend Vegan Nirvana. It’s sort of comfort food. One thing that is unusual about Vegan Nirvana is that it’s open super late. The hours are 11am-midnight, seven days a week. I know I’ll be back… I only wish they had one in Seattle..