by CHLOE.: Boston Back Bay Opening

The hip, insta-friendly vegan food chain by CHLOE. opened its 11th brick and mortar store on Tuesday in Boston’s Back Bay on Boylston Street. I got a sneak preview at Friends & Family Day, one day before the Grand Opening. Fellow bloggers were ordering a wide array of dishes and carefully arranging them to capture the perfect shot, upbeat music was playing and everyone there was having a good time sampling the menu. Read on to learn more about the the event and for pics and tips on what to order. 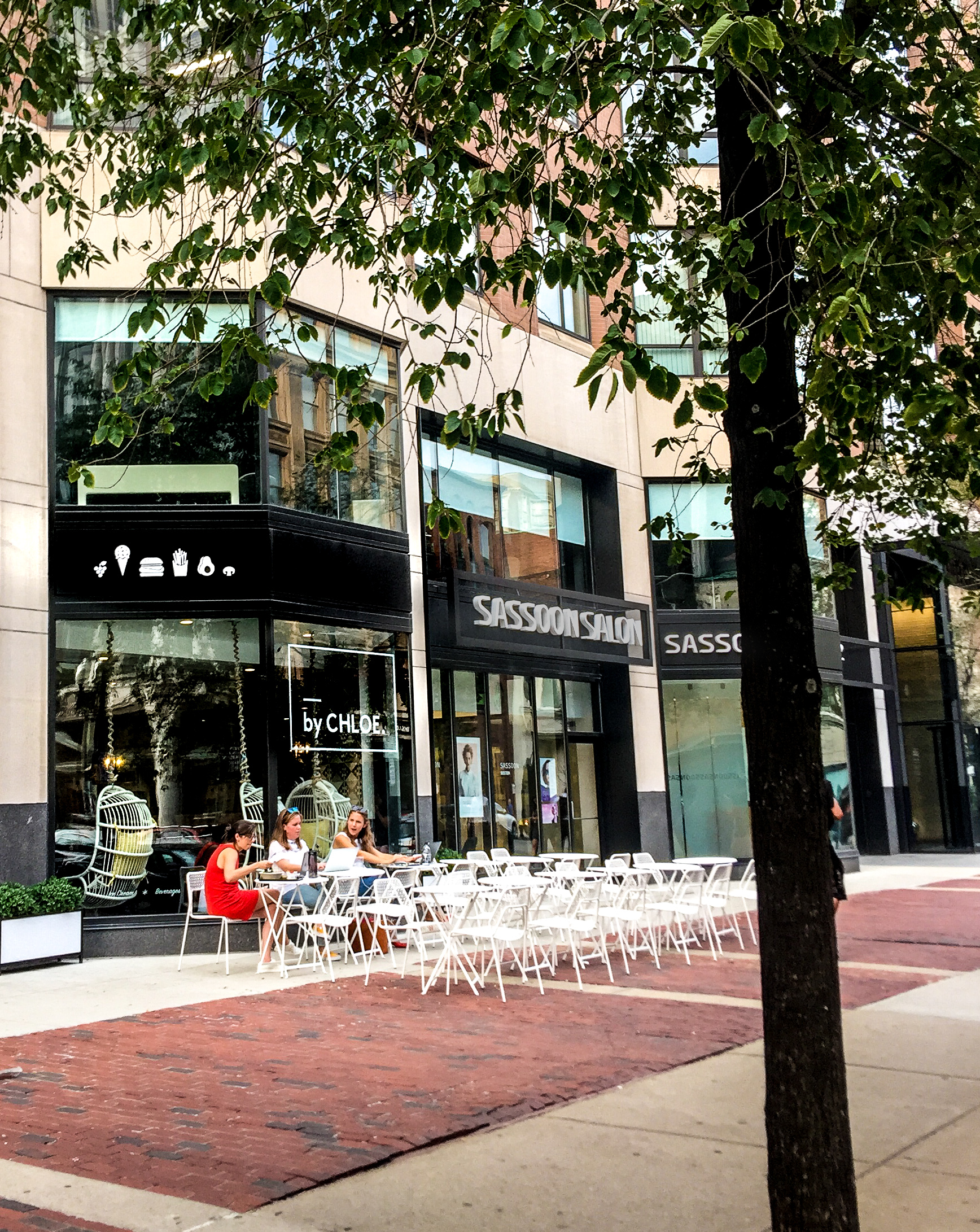 by CHLOE. Exterior on Friends & Family Day in Boston’s Back Bay.

How I Popped my by Chloe. CHERRY

The first time I stepped inside a by CHLOE. location was in October 2017. I was in Williamsburg, NYC, and it was cold. I was on my way to an eclectic jewelry store to buy my mom a birthday gift. I ended up buying my now fiancé a pewter bird skull pendant and a long, sterling silver chain.

I was bopping towards the subway when a storefront caught my eye: by CHLOE. I saw a bird swing chair hanging from a chain attached to the ceiling and thought it was the brand See By Chloe.

I stepped in and my jaw dropped at the cute, instagram-friendly décor and gray and white striped floor tiles and black and white tables. I ordered the yummiest dessert I could see-a Birthday Cake Push Pop and was suprised it was non-dairy.

“The whole restaurant is vegan,” said the girl behind the counter. “Have you not been here before?”

And that is how I fell down the rabbit hole into this bright, beautiful, photo-perfect vegan restaurant chain.

Flash forward 10 months (to this week), and I had a layover in Boston. I worked the red eye flight in and slept until two p.m. I finally set foot outside, on a mission to get coffee. Another flight attendant had recommended Tatte, which fortuitously turned out to be two doors down from by CHLOE. My heart skipped a beat when I saw the by CHLOE. storefront and I dropped my other plans.

Since October 2017, I have immersed myself in plant-based cooking, dining, snacking and eating. From Mexico to California to the East Coast and the Midwest, I have tracked down and hit up restaurants and specialty stores specializing in vegan and plant-based options.

Menu items like: Tofu scrambles, quinoa and cashew mozz (and other cheeses) have become part of my lexicon and cooking repertoire. It was exciting to come back to by CHLOE. with a greater understanding of plant-based dining. However, as someone who once walked in knowing little about plant-based dining, I can vouch for the fact that anybody can eat at a by CHLOE. restaurant and enjoy themselves. So invite your non-veg friends! 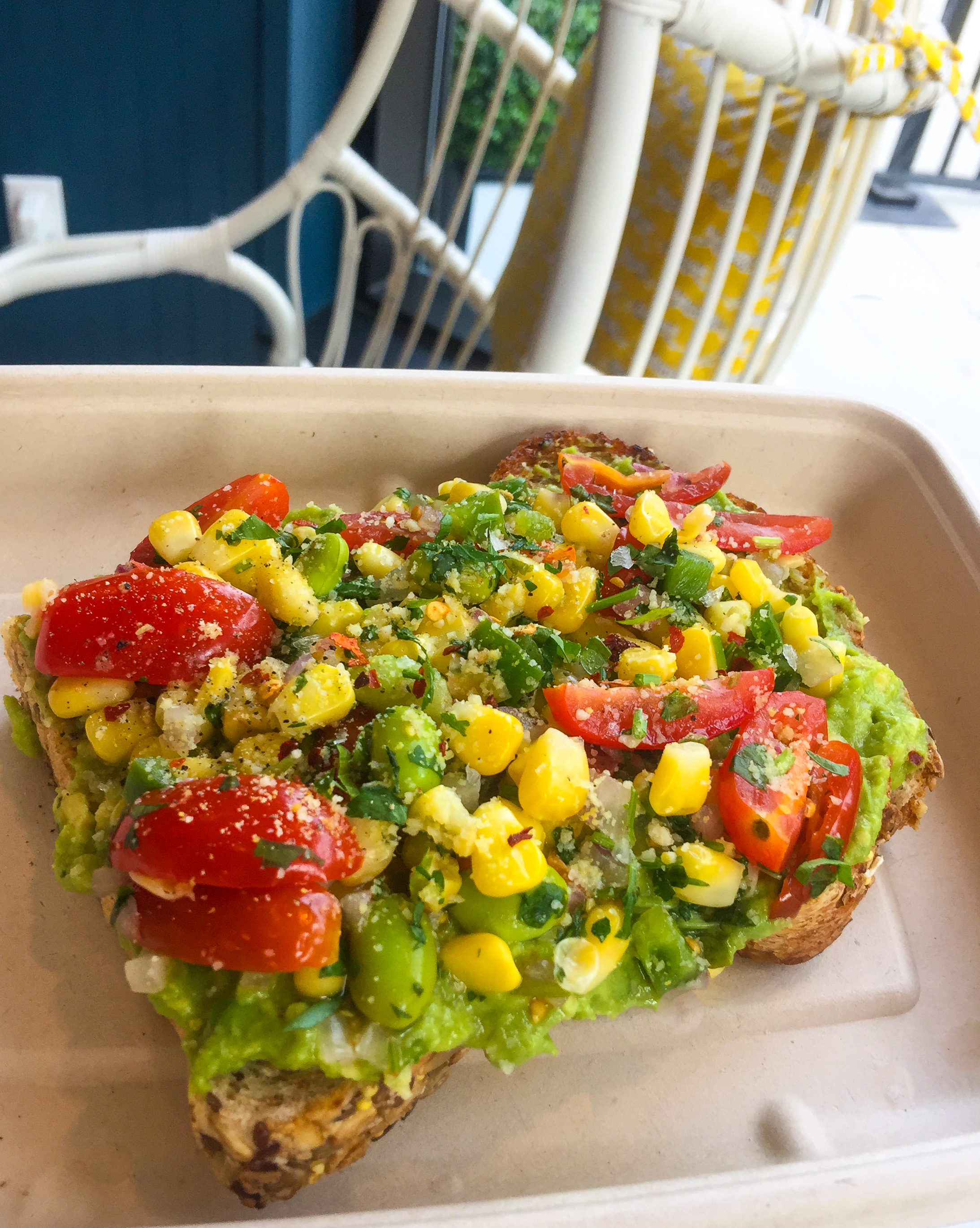 Someone was drinking a fabulous looking purple smoothie so I asked her what she had ordered. It was Butterfly Effect, my next menu choice. 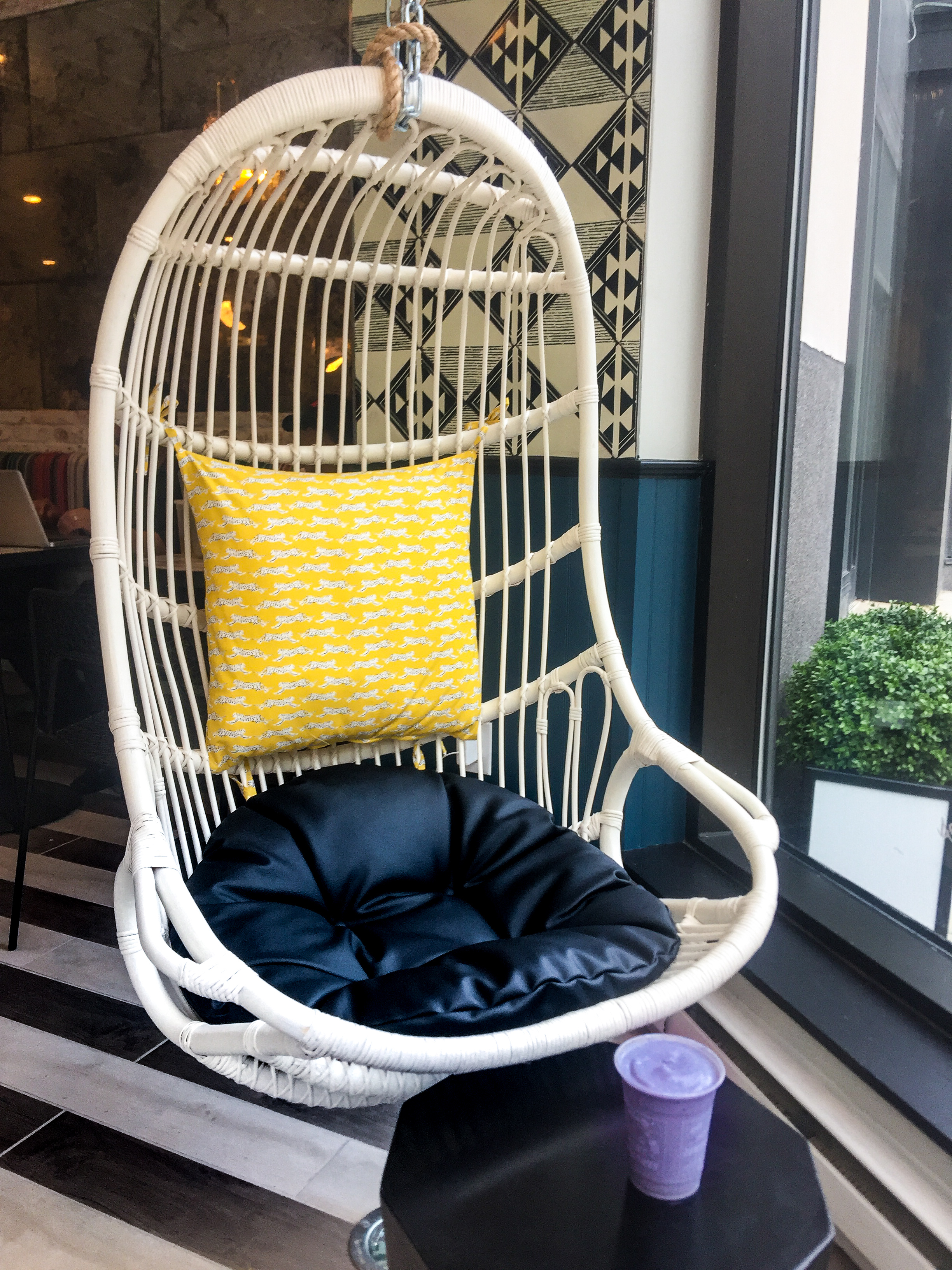 I ended the sampling with a Push Pop in Birthday Cake (throwback to my first one in NYC). My birthday is in three weeks, so I considered it an early birthday treat. Ha! 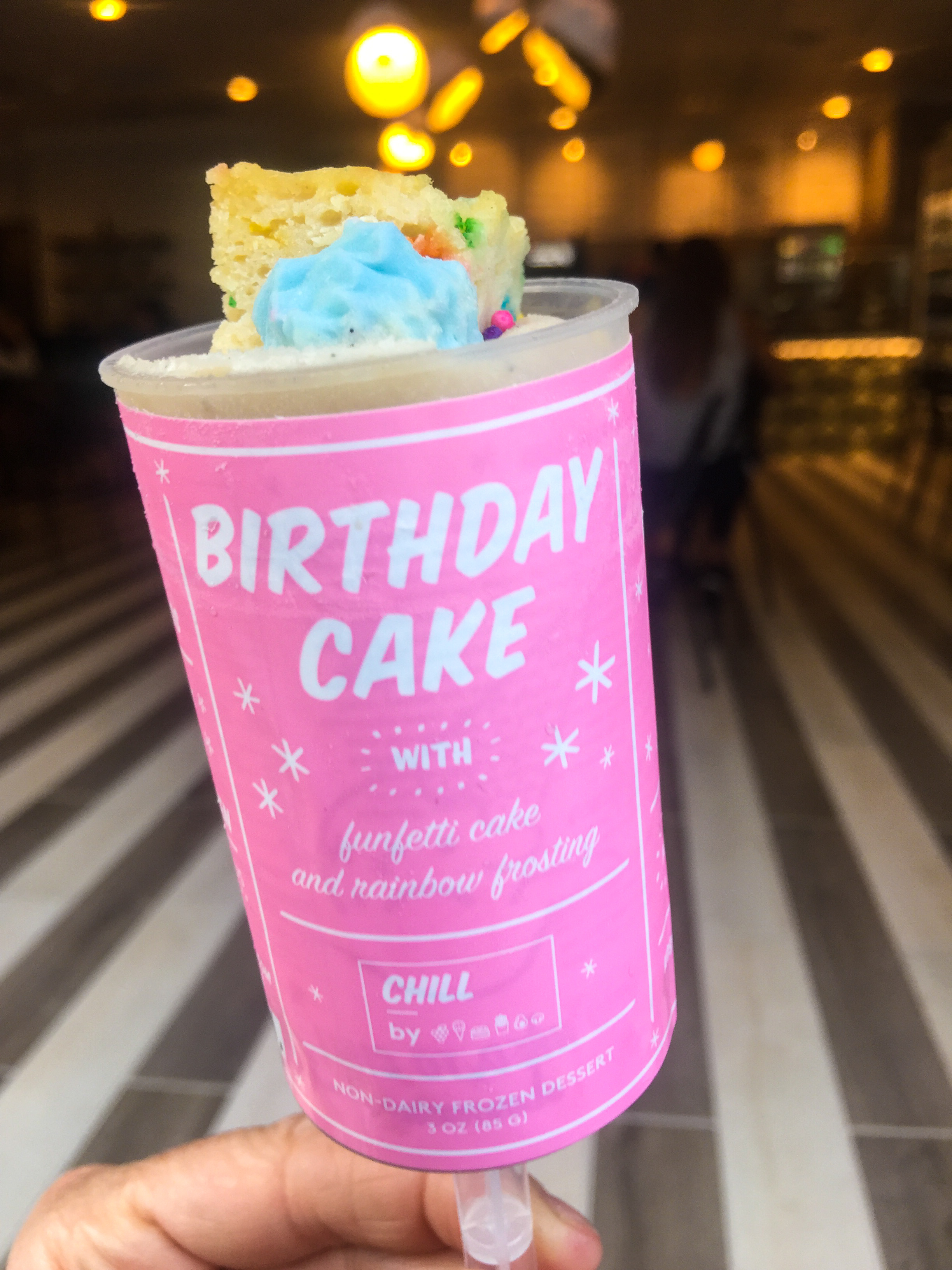 I’m not joking when I say I want to try the entire menu. The mac n’ cheese looks delicious (one blogger said it was the best vegan mac n’ cheese she has ever had). I love making vegan mac n’ cheese so I can’t wait to try it at by CHLOE. to get inspiration on tweaks I can make to my version. I’m always trying to improve it. The burgers look really good too.

by CHLOE. Back Bay was off the hook! A steady flow of people walked in while I was there only to discover it wasn’t open quite yet! I found out later they were offering free Uber Eats deliveries until 8 p.m.!! Had I known, I would have ordered some mac n’ cheese and a burger for dinner and had it delivered to my hotel!! I was staying a few blocks away. Luckily, with my job, I will be in Boston and New York regularly so I can get my by Chloe fix there! And you know I’m ordering some mac n’ cheese. 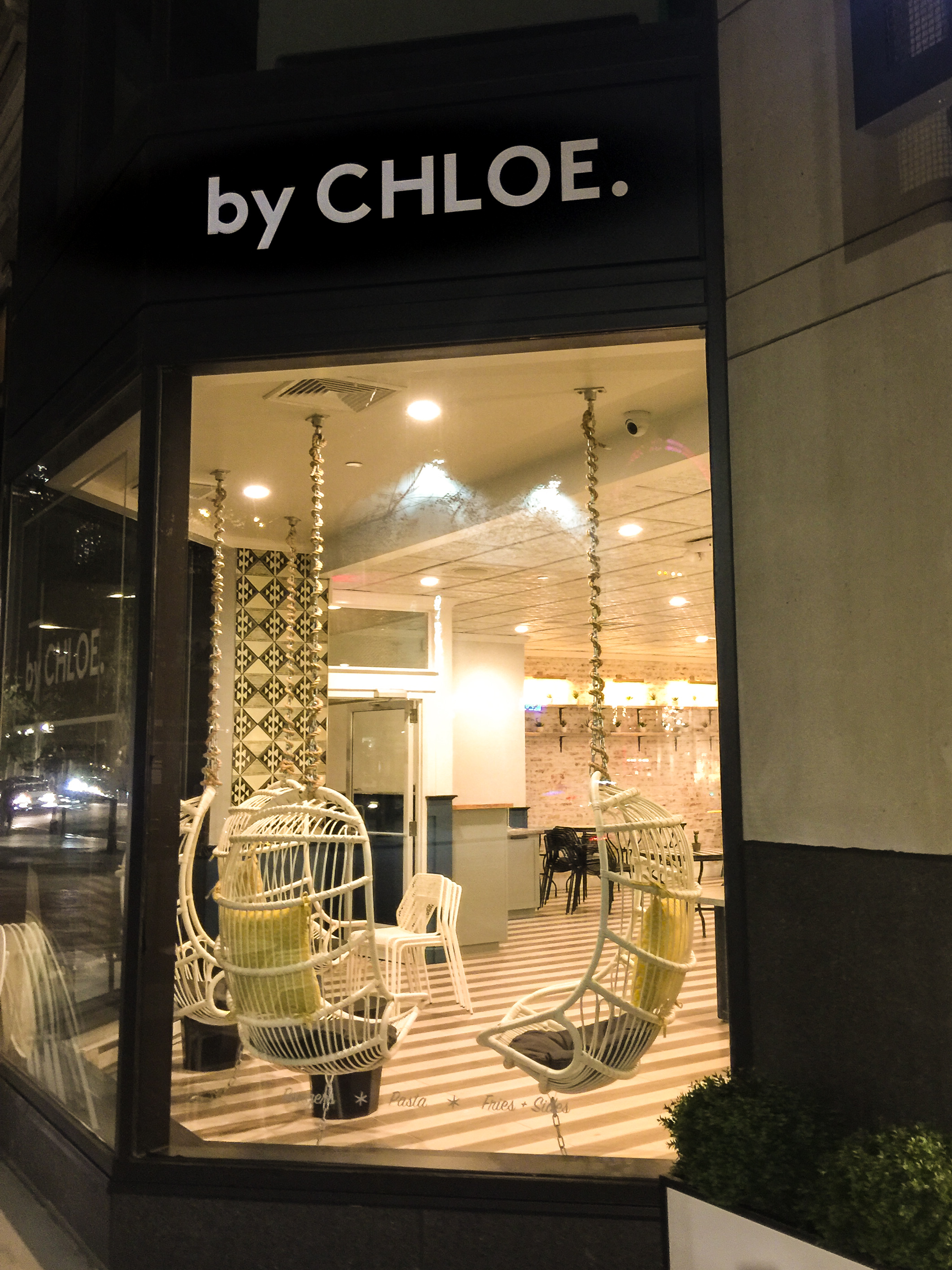 by CHLOE. Boston Back Bay the Night Before the Grand Opening.

One look at by CHLOE.’s Instagram page (@eatbychloe) proves that this is an artistic, progressive brand. Sometimes I scroll through their page just to see the beautiful rainbow of colors that are batched together in similar shades, gradually transitioning through a rainbow of red, orange, yellow, green, blue, purple, pink, black…. It is not a typical food page. It could easily be an advertising agency’s calling card or the page of an Andy Warhol aficionado. The “original and curated content” comes directly from Co-Founder and Creative Director Samantha Wasser (@itsmesamwass).

Co-Founder Samantha Wasser made Zagat’s list of “30 under 30.” by CHLOE. is not her first foray into the world of food. She opened Horchata de Nueva York in NYC’s Greenwich Village in 2014, the first by CHLOE. in 2015. She co-founded The Sosta that opened in NYC’s Nolita last summer. Next spring she is opening DEZ with chef Eden Grinshpan. Not to mention, another by CHLOE. is opening soon in NYC’s Seaport district. The millennial restaurateur is making waves in the world of fast-casual brands.

If you are not familiar with by CHLOE., here is a little background on the company’s vision (from their website):

“by CHLOE. aims to share delicious, wholesome, plant-based food that fuels and energizes without compromising flavor, taste or satisfaction. Our chef-driven vegan menu features locally-sourced ingredients in their most natural form to create inspired dishes, made 100% by us daily. We are passionate about feeding our customers hearty, nourishing meals made from whole ingredients that can have a positive impact on their overall mind, body and health.

At by CHLOE., our goal is simple —to redefine what it means to eat well.

We are committed to maintaining a sustainable and vegan lifestyle and actively contribute towards lowering our carbon footprint and preserving our planet’s water supply through our animal-free menu, mindful ingredient sourcing and eco-friendly packaging.