Seattle is known for Pike Place Market, the Gum Wall in Post Alley, the original Starbucks and the Space Needle but it also has a vibrant theatre and music scene. I recently caught a matinee of the sold-out touring Broadway show Les Miserables. Read on for my Seattle theatre guide including where to park, where to sleep, where to score the best Vegan burger and why The Paramount Theatre is my favorite place to catch a show. 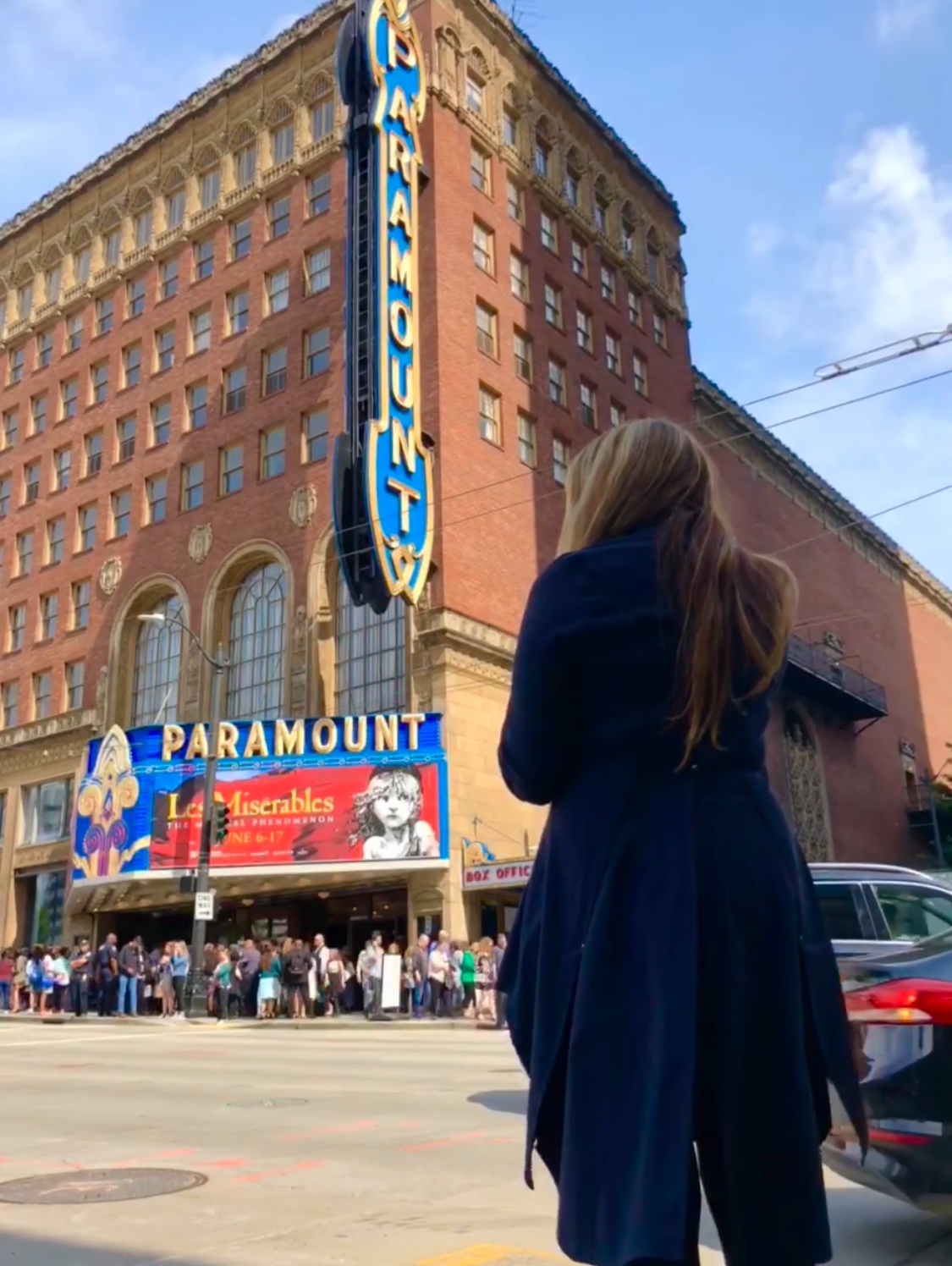 Across the street from The Paramount before the Les Miserables Matinee.

Paramount Studios in Hollywood decided to build a movie theatre in every major city between 1926-28 which is how the Paramount Theatre in Seattle came to be. It is a beautiful and iconic theater in which every detail down to the bathroom crown molding is a throwback to the glorious 1920s. You have to visit the Paramount Theatre when you are in Seattle. It is a beautiful,  intimate theatre and has a seating capacity of 2,807 people.

The Broadway cast of Les Miserables swung through Seattle this summer, and I scored two tickets! I saw Les Miserables when I was 10-years-old in Los Angeles and I still remember being awed by the musical and the performers. When I took singing lessons in high school, I chose Les Miserables songs and it’s still my favorite musical. The cast did a phenomenal job and sang like angels. I cried a lot. Bring your tissues!

Tom Douglas is an iconic Seattle chef with 16 restaurants spread out downtown. You can’t throw a rock in Seattle without hitting a Tom Douglas restaurant and you can’t leave Seattle without eating at one of his joints. Seriously. They won’t let you on the plane. Tom Douglas’s restaurant The Carlisle Room is kitty corner to the Paramount Theatre and is regularly booked up before and after shows with patrons of the arts. It is the easiest and coolest restaurant to eat at when you catch a show at the Paramount, hands down. There are great plant-based options on the menu. The Bob Dylan mural in the back “sets the tone for this 70’s revolution inspired plant forward dining room. They had me at Bob Dylan. 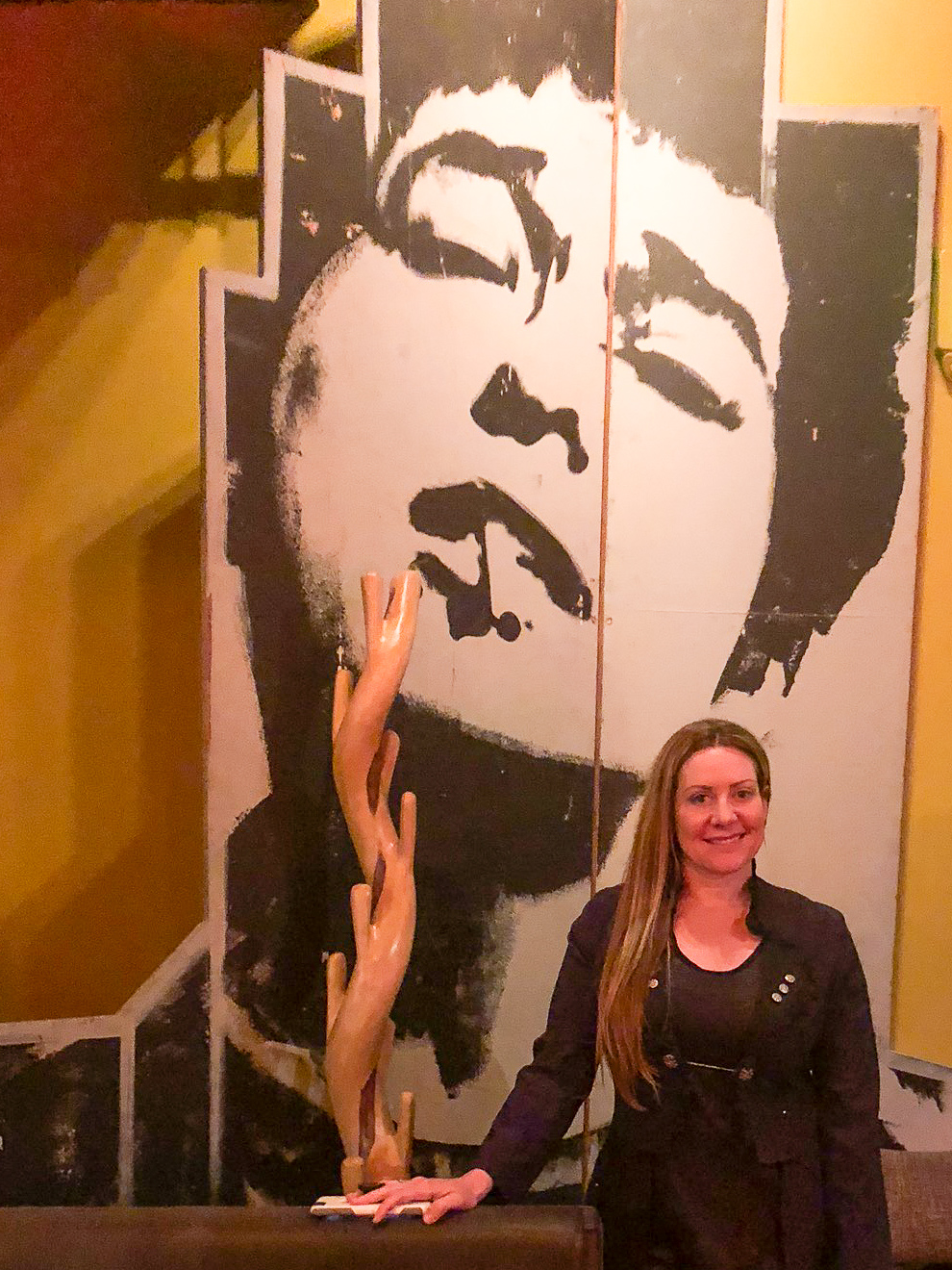 Standing in front of the iconic Bob Dylan mural at The Carlisle Room, Seattle (a Tom Douglas restaurant).

I headed to The Carlisle Room after a Les Mis matinee. I had been wanting to try the Impossible Burger from Impossible Foods. They found a way to make meat using plant heme and the innovative company is backed by Bill Gates. It’s so named because it seemed impossible to create a plant-based meat that tastes so much like the real thing and even “bleeds.” 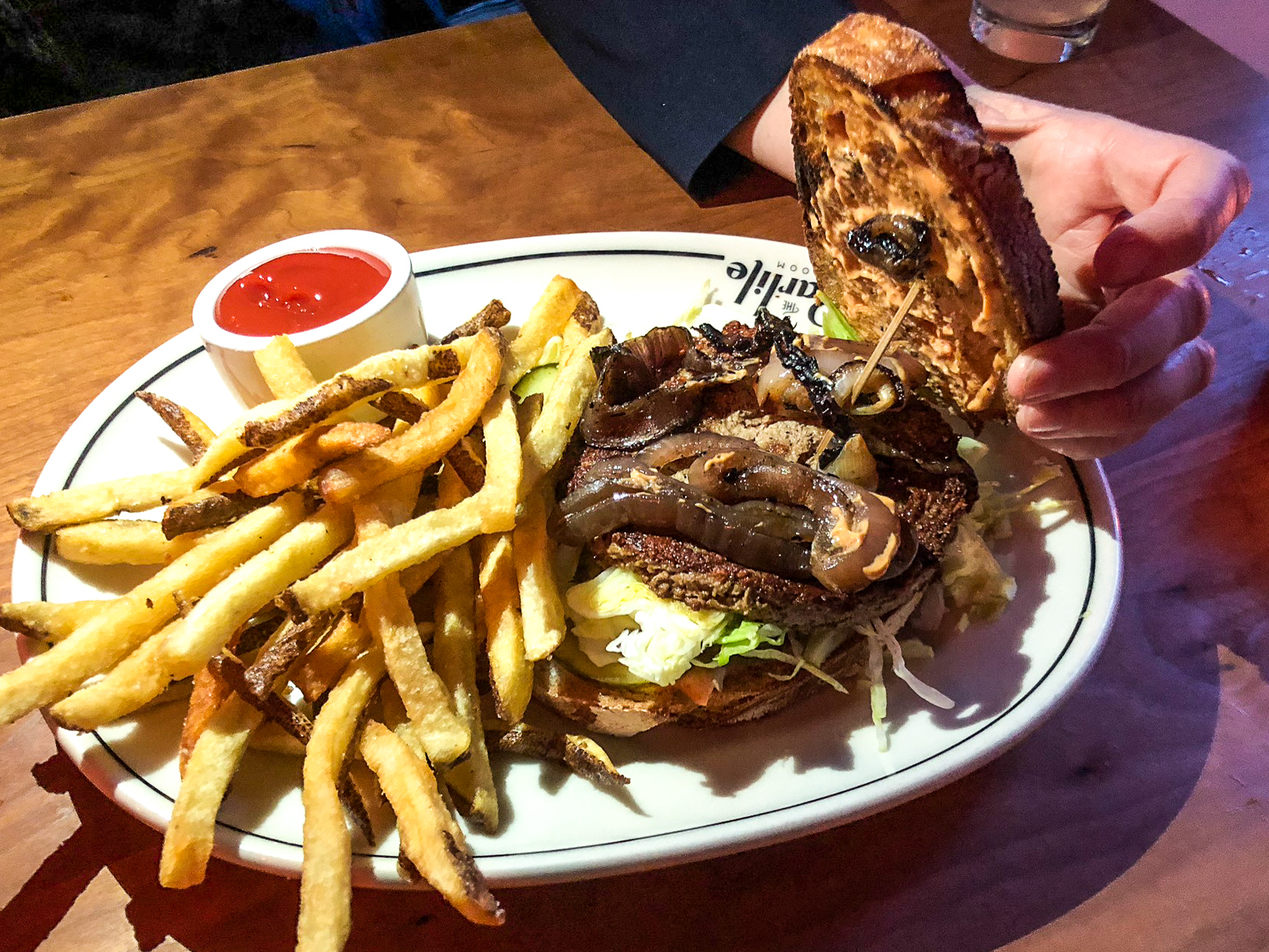 The  Impossible Burger can be ordered with beef or with the Impossible patty (ask for vegan style if you want to keep it dairy free). It comes with a quarter pound of plant based meat, 1000 island, grilled onions, cheese, pickles and fries. It is huge and filling. The funny thing is, I’m not crazy about it because it tastes like meat! The consistency is a little like meat and it looks a little pink. My fiance loves it! He also likes Beyond Meat burgers which I don’t like because they taste and look too much like meat. You can’t please all of the people all of the time. Ha! But the burgers are a hit and there are other plant-based options as well. I try to find the coolest plant based restaurants or meals regardless of what city I’m in. I call Seattle home and I have a list of rad plant based restaurants. If you are up on the latest plant based news, you know Impossible Foods is disrupting the industry. It’s pretty bad ass. 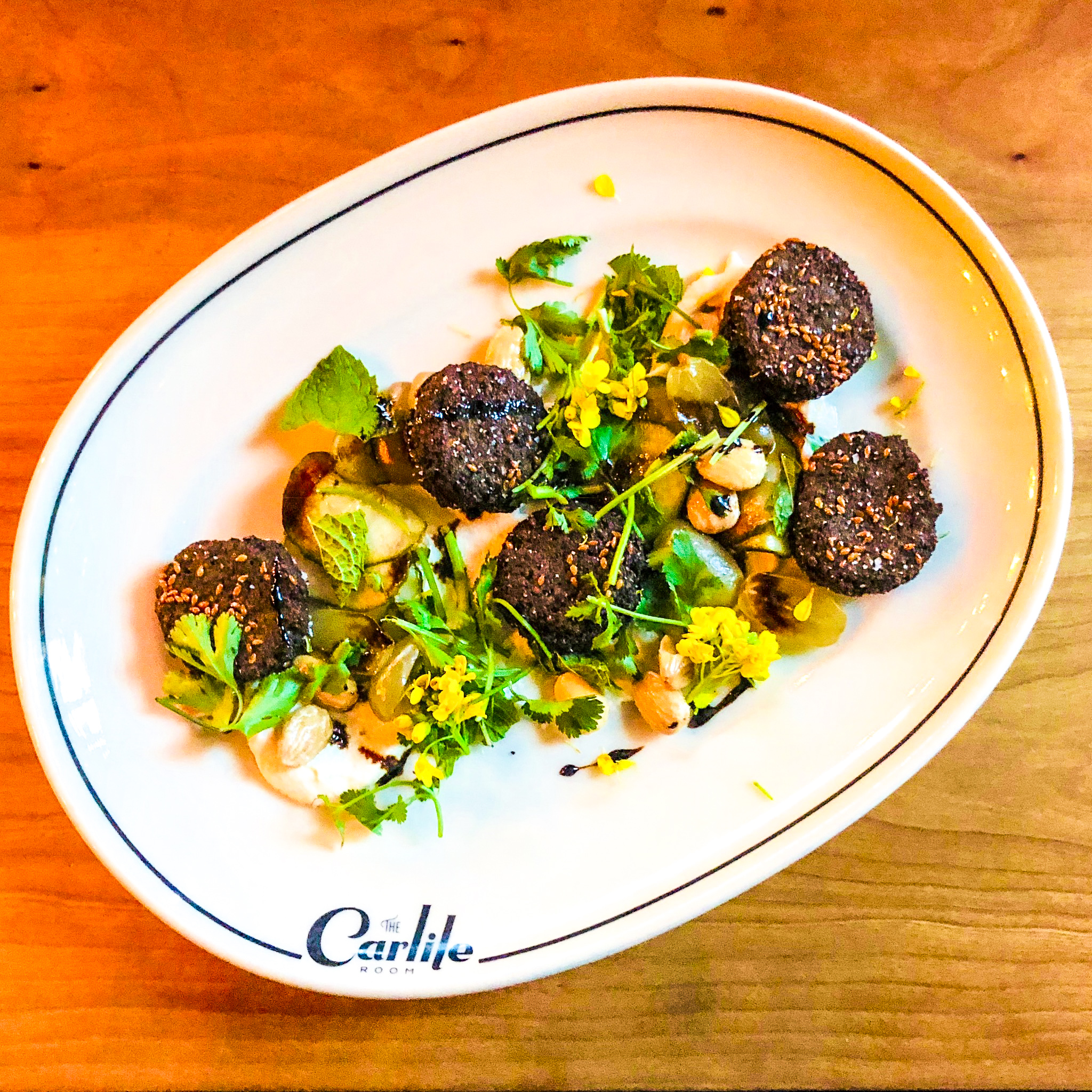 Chickpea-fava fritter appetizer at The Carlisle Room by Tom Douglas.

An appetizer we really like is the Chickpea-fava fritters with almond tahini, cilantro, mint and carob syrup. So yummy! The Carlisle has a rotating dessert menu. Another fun late night Tom Douglas spot is The Palace Kitchen. It’s open until 1 a.m. so you can get appetizers, entrees, cocktails, or espresso drinks. Catch an uber over or walk. It’s not far. As of late, all desserts are non-vegan. If you parked where I recommend (see all recommendations below) grab a cupcake from Trophy Cupcakes as you head to the parking garage (it’s located right next to the pay stations on the first floor of Pacific Place).